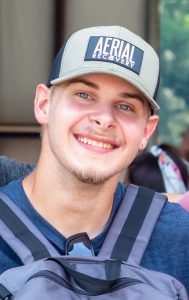 Kaemon is a smart, kind young man who a few years ago began to delve into areas unhealthy to him and his family. He did not appreciate school, and he began to cause trouble, get in fights, and abuse alcohol and drugs, and he was on a self-professed slippery slope. These things only compounded the other mental health issues he was dealing with and he ended up looking in the wrong places to find a quick way to feel “happy”.

Once on the Cul2vate Farm, Kaemon immediately connected with his co-workers and began to see that faith in God, good, hard work, and trusting others would begin true healing in his life. He and Cul2vator Jake formed a very special bond, and Jake took him to a weekend getaway with Aerial Recovery Group, an economic and disaster relief firm. While there, Kaemon found purpose and a new path. It is incredible how our Cul2vators are placed together for reasons only God could ordain.

While at Cul2vate, he was encouraged to work on his GED, received his Master Gardener certificate, and found that resilience looks different for everyone but that God is faithful patiently waits for each of us to listen to His calling.

“Having a place where you can show up and be yourself and be honest and be genuine and not be judged for that…I feel like that’s something most people don’t have, and Cul2vate is definitely that for that for a lot of people.” But don’t take our word for it! Hear a little more from Kaemon below.